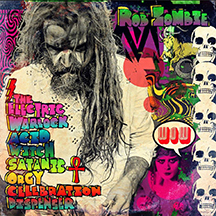 It’s time to pop your earbuds in and rock out to the master of Horror Rock himself, Rob Zombie. In his sixth solo album Zombie delivers in his typical crazy fashion. While it may not be for the faint of heart, it is a fun take on the genre that Zombie has defined over his illustrious career.

The second track doesn’t hold onto the fast pace that the intro track brings, instead opting for a more conservative medium tempo, despite this slowed pace, it still manages to hold the listener’s interest. It does hold a lot of sound bites from outside sources, so if you’re looking for just music, this may not be the track for you. That being said, even the samples are twisted into Zombie’s world in such a fashion that makes them as much of a part of the song as the guitars and drums. After multiple listens, it becomes apparent without these samples the track would just not be a Rob Zombie track. It is a fun listen, regardless of how someone might feel about samples in the track.

From here, Zombie moves onto “The Life And Times Of A Teenage Rock God” and does he ever earn the title of rock god in this song. Starting with the strong build from the drums, the song brings back feelings from one of his earlier singles, “Pussy Liquor,” and takes the listener on a nostalgic trip back in time. This particular song is also a good example of what a Rob Zombie concert feels like. It builds, has a strong climax, then lets the listener drift into their own world of ecstasy while they wait for the next track to begin. Which brings us to the first single off of the album.

“Well, Everybody’s F*cking In A U.F.O.” is an interesting three minutes to spend listening to. While it’s the first single off of the album, it does beg one question and that is, Why? The first single off an album should be a representation as a whole for the album and hook the listener into wanting to hear more. This track does present an interesting listen to say the least, but does not really represent the album as a whole. It could be the fact that, based off of the title, the new listener is expected to want to see what the full album is all about. However, for an old fan, it seems as though it is nothing more than a random title thrown into the middle of an already chaotic title selection. That being said, the track is still worth a listen, but should not be considered as the primary representation of the album.

If you are really looking for a solid representation of the album, then perhaps the tracks that would be a better selection for you are “Medication For The Melancholy” or “In The Age Of The Consecrated Vampire We All Get High.” Slammed right in the middle of the album, both of these tracks are strong contenders for the next big hit for Zombie. They both exhibit the true horror rock form the classic listener has come to expect and manage to pair it with a new side of Zombie that still manages to stay true to his original form. In doing this, they also help to cement this as a solid album for Rob Zombie and show that even after twenty years he still has that touch that can make rockers everywhere still love him. Medication gives you the feel of a smooth driving song that will ensure you have a few speeding tickets to answer to in the near future. Get High, on the other hand, is the song that makes you want to get up and throw your horns into the air. It is, in its own right, an anthem for the rocker to stand behind and scream at the tops of their lungs. As has been stated before, either of these songs would make strong contenders for the best single track on the album. With the rest of the remainder of the album resting on the shoulders of these songs, it will undoubtedly be a success.

Speaking of the rest of the album, it should be noted that there are many good selections to still choose from. While they may not be as stand out as any of the earlier tracks, they do still hold merit all their own. Whether it be the synth driven “Super-Doom-Hex-Gloom Part One” or the strong up beat “Get Your Boots On! That’s The End Of Rock And Roll” there is something for everyone to enjoy.

While the album itself falls in at a small thirty-one minutes and twenty-three seconds, it does still make an excellent case for a top ten album for Rob Zombie. It does lag in places and has a couple of filler tracks, but overall the effect is not lost, plus a few instrumentals here and there can sometimes build the ambience of an album further. That is exactly what happens here and why Zombie’s new album gets a 4.2/5. So the next time you are looking for some horror rock to listen to, don’t forget the Zombie, because he certainly has not forgotten us.

Michael Blanton is an aspiring writer from upstate South Carolina. He has a degree in Psychology from Winthrop University with a focus in human behavior and cultural patterns. He is also an avid fan of horror movies and comic books.

This entry was posted in Music. Bookmark the permalink.